by Émile Martel
Let me first thank the organizers of this meeting for their welcome. The name of this City is closely linked to Linguistic rights, the Catalan PEN centre is closely linked to great PEN causes. We, in Quebec PEN, and all Quebec writers, in fact, feel a particular proximity to Catalunha as both our peoples have been living and writing in a minority language surrounded by a large culture.

As you know, we in Quebec PEN have launched a reflexion on translation; we want it to be the theme of our 81st Congress in Quebec City in October 2015 and we’re so ambitious as to hope that we can make the Assembly of delegates approve a Déclaration de Québec sur les traducteurs et la traduction. The process for this is, of course, to present in due time a draft which could be commented upon and blessed at the next meeting of the Committee on translation and Linguistic Rights.

You will have noticed that I said, Déclaration de Québec sur les traducteurs et la traduction. It is my conviction that the profession of translator should be exalted, valued, admired and recognized much more than it has until now. We’ll endeavour to make this clear in the draft declaration.

There is a small group of us who have put a few sentences together, but we’re not quite ready to show it to you yet. But I can tell you already, about that document, that it will address two fundamental truths: the first one is that the translator is a creator and not just a messenger carrying words from one side of the river of knowledge and art to the other shore; and the second one is that translation is profoundly linked to freedom of expression, a fundamental and essential tenet of PEN.

Another aspect of the Quebec Congress in general is that it is our intention that it endeavour to bring the French language in the centre of our dialogue. It’ll be a trilingual Congress, of course, but we have been feeling for a few years that English has been used as an obvious means of communication between us in PEN. It may be obvious because it is the most common language among us, but when we can afford it, French must be a natural way of communicating, it should not be perceived as a burden. It should not be ‘tolerated’, or ‘accepted’, it should be natural and there, just there. Tolerance is, as I understand, a measure of bridled impatience and reluctant generosity. We, and I believe all French speaking members of PEN across the world, wish to feel at home in our organization, while recognizing that a large proportion of our colleagues from non French and non Spanish and non English speaking backgrounds are more likely to understand English. Thus an efficient system of simultaneous translation is anticipated for the Quebec Congress.

As a writer and a translator, I’m often interested in the difference between creation and translation, even wondering if there is any difference at all. From an image in the mind, from a concept which is imprecise, what is it that pushes a human being to finding words to express it? This is the first translation. This is giving birth to language, this is allowing words to hit the sheet of paper or the screen, or be heard by somebody, and this is where literature occurs. Later on, maybe, a translator will come along and start the process from the minute after the birth of language and the work he or she sets on to translate will have a totally new future, a new and different life. Literature reborn.

There is a concept, or rather a poetic image that has occurred to me, and it is that in translation, contrary to other artistic expressions, like, say, pottery or the visual arts, you can undo what you have done and decide to break up the puzzle you had assembled and put the pieces in a different way while still remaining faithful to the picture on the top of the box. You can do it with fewer words or with more words, you can change the shapes and the colors and still come up with roughly the same picture. What other art form puts the artist at such a high risk, what work of art is so inherently fragile?

The writer is the interpreter of his own mind, the translator of his own heart and the language he uses is the threshold of literature, where the first translation takes place, this is where the birth is staged and a piece of paper or the screen of a computer welcome the new arrival and make it exist and speak.

There is a feeling I know I share with all of you, which is the emotion in front of what the interpreter does with the original work. In music, the composer frequently disappears behind the interpreter. You forget Bach and you recognize Glenn Gould. When I was an adolescent, I remember hearing on a 78 rpm 12 inch record the Toccata and Fugue in B minor by Bach played by Albert Schweitzer. I was astonished and can never hear organ music without thinking of Schweitzer.

If we think of the spoken word, on the other hand, imagine the impact of a text read by Richard Burton and Dylan Thomas in English, or Philippe Noiret in French. Where is the author behind these extraordinary instruments of seduction? These guys could read the telephone book or the menu of a restaurant and still gather applauses from an adoring crowd.

And the human voice is just one of the tools of communication that triggers a creative power. Think for a second of the variety of typographical tools that can be used; of the illustrations that can be added to a text; of the great importance of white space on the page. Think of the quality of the paper on which the words are printed (texture for your fingers, colour for your eyes). And I’m not talking about the temperature in the room where the reader is, the background sounds of wind or waves. How comfortable is the chair?

Translation, like writing, is the transportation of an emotion. Literary language is the interpretation of a reality or of a dream that the author tries to put into words before that reality of that dream escapes him, before it disappears forever or comes back in a less beautiful form.

There are two anecdotes I want to tell you on his theme: for years, I’ve been trying to convince a musicologist, or a historian of music, or the great maestro of a famous orchestra, or a composer who knows Beethoven’s work very well to find and to write down and to make me hear what it is that Beethoven, by that time completely deaf, was hearing in his head, that most singular and fascinating piece of music which he was trying to get the musicians to play at the moment of the première of the Ninth Symphony when the written music was over, the musicians had stopped playing and he, the composer, was still directing them with his hands and his whole body, until somebody came to him and gestured him to stop, that nobody could hear him, nor his music.

Another example which haunts me and speaks of the urgency to translate into written words the work that hovers in the author’s head involves Coleridge, the English romantic poet of the late XVIIIth century. "Kubla Khan or A vision in a dream" is no doubt his most famous poem, along with "The rime of the ancient mariner".

Coleridge writes, I don’t know where, that one night, while he was on an opium high, he saw unfold in his mind a whole poem, with all the images and metaphors, all the details. It was going to be about Kubla Khan and in the morning, he only had to write it down. He sat down to do so and he was doing fine when one of his neighbours knocked on the door. A polite man, Coleridge got up to welcome him and when he came back to his table, most of the rest of the poem had disappeared from his mind. The work was going to be between 200 and 300 verses. He had stopped at verse 30 and he painfully put together 24 more verses. Don’t we want to know what those 250 verses were about?

And let me finish on the story of a rather cute fraudulent translation: A rather long time ago, we had a friend who published in a literary magazine poems that he had written in English and that he had, so he said, translated to cuneiform. My personal feeling was that his talent in writing was about as mediocre as his talent in translating. But how was I to know, given the immense distraction he imposed upon the reader? I could see him picking nails from a barrel and finding a way to glue them in some sort of a meaningful way to a sheet of papyrus.

Meeting of the Translation and Linguistic Rights Commitee, Girona, June 25th to 27th, 2014 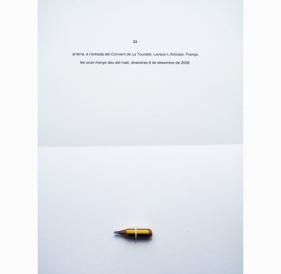