The Right Voice, the Right Rhythm

by Michael Eaude
This year a sudden flurry of books written in Catalan are being published in English. Michael Eaude talked to translator Peter Bush about this and the skills of literary translation.

It’s an old cliché that Catalan-language books are not translated to English. And like many clichés, it was mainly true. In the 1980s and ’90s, only a handful of novels translated from Catalan to English were published commercially. Since 2005, the landscape has changed: Sánchez Piñol, Jordi Coca, Monzó, Maria Barbal, Teresa Solana are just some of the writers translated in recent years. And now, in 2013 a dozen books are appearing in English translation: contemporary works, like Francesc Serés’ Russian Tales or Najat El Hachmi’s The Body Hunter, and classics of twentieth-century literature, such as Joan Sales’ Uncertain Glory, Josep Pla’s The Gray Notebook and Mercè Rodoreda’s In Diamond Square.

Peter Bush, Barcelona resident and translator of all five above-mentioned books, told me how this eruption of Catalan literature into English had come about."It’s to do with the higher profile that Catalonia now has politically. And it’s to do with the Ramon Llull Institute, their presence at the London Book Fair and Frankfurt, especially when Catalonia was the featured country in 2007. The Llull has also invited English-language publishers to Catalonia and of course provides funds for translation."

Peter Bush has been translating from Spanish to English for nearly 30 years. Former Director of the British Centre for Literary Translation at the University of East Anglia, he is particularly known for translating a dozen Juan Goytisolo books. Recently he has been doing more from Catalan and has chosen to turn down commissions for books from Spanish. This year he has ten translated books coming out, nearly all from Catalan. "People say to me, how can you translate 10 books in one year? And the answer to that is I haven’t. Some of the translations, like The Gray Notebook, I’ve been working on for two and a half years."

In March 2013 his new version of Rodoreda’s In Diamond Square came out. It’s the third translation into English, following Eda O’Shiel’s, published by Diana Athill at André Deutsch in 1967, and David Rosenthal’s in 1980. "There’s a view that translated literature is difficult, but there’s no reason why. Rodoreda is a very accessible and down-to-earth writer. A book’s success depends on reviews and publishers’ ability to get it into bookshops."

Matthew Tree reported that, on a Pedrolo book offered to a London publisher in 1979, the reader had scrawled: "Simply no readership here for regional literature". Inevitably, books in Catalan have been ignored in the English-speaking world even more than books from strong, state-backed languages such as Spanish or French. Bush comments: "When it comes to Catalan culture, fewer are familiar with it. It is a whole process of persuading, cajoling the English-speaking world that this is something that ought to be out there." He does not mention it, but his own prestige, enthusiasm and proposals have also been key factors in this mini-boom in translation.

I wondered how hard it was to catch the narrator Natàlia’s unique voice in In Diamond Square. "The right voice is key to any successful translation. I prepared myself by reading several novels about the working-class from the 1930s or Alan Sillitoe, whose characters speak non-standard English. I read Vassily Grossman’s Life and Fate for the impact war has on ordinary people. And I drew on my own experience: my mother lived six years through the Second World War with my father away and later she never stopped talking about it." Impressed, I asked him if he always prepares translations so thoroughly. "With books that are really original, I try to read round them. Translators are important gatekeepers, especially when ushering the literature of a ‘minority’ culture into the space of world literature."

Peter has just completed The Gray Notebook for the New York Review of Books. Had he researched the background as thoroughly as for In Diamond Square? "I really didn’t feel it was necessary. I know a wide range of early 20th-century English writing and felt I was pretty well grounded in that, so I didn’t do any specific reading for Pla. Then again, there’s no-one quite like Pla. The Gray Notebook is one of the most original pieces of autobiographical writing in European literature."

The Gray Notebook is so huge it must be daunting. "It takes a long time because it’s 300,000 words, but in relative terms a book of short stories can take longer, because of its different styles, your mind has to grapple with intense themes. It may be much more demanding in terms of intellectual energy than a longer book."

"The art of translation is to recreate the original style of a writer. There are different challenges. Juan Goytisolo, for example, reads a great deal of mediaeval Spanish literature and that is reflected in his writing. I think my own background in reading that same literature means I am better prepared for the challenge of interpreting him. In the case of Pla, though everything is very precise and carefully written, he is not so dense stylistically and there are completely different challenges: for example, translating his descriptions of landscapes or of the colour of the sea."

Now that he’s been a full-time literary translator for ten years, I wonder if it’s got any easier. "I read more critically, looking for things I know I need to think about in order to translate, the register in a dialogue, the weight of an adjective. All that process has become, I hope, much more sensitive, because you’re doing it all the time and your brain develops."

Peter recently translated a non-fiction book, Run or Die!, the story of the world champion trail-runner, Catalan Kilian Jornet. "I was approached by a publisher from Boulder, Colorado. I’d never heard of the book, but thought it was interesting. It’s not a world I know about, it’s a world of running, ski-mountaineering, doing things that are very dangerous. I took it on because it brings variety to what you’re doing, it brings you into contact with another range of language. I had to research terms to do with mountains, but though the search for particular lexical terms is important, the challenge here is to get the rhythm of the book. There’s a real style to this, he is trying to recreate what he does when he’s running, what his body is feeling, his hamstrings, his thigh muscles." Translation becomes not just catching the voice of the writer, but the very running rhythm of the prose.

"The Body Hunter is similar. Najat El Hachmi describes very precisely, in a very writerly way, the bodily movements of the woman cleaning or in the pizza factory. The big challenge in translation can be in extremely subtle polysemic prose, but it can also be very detailed physical descriptions of cleaning tiles, of what’s happening with the legs or arms. This is a great challenge because there are such different ways of describing physical movements in Catalan and in English. What you can do with verbs, the pronouns you have to use in Catalan to describe what the person’s doing."

Deeply versed in Spanish and Catalan culture, Peter Bush is a very serious translator, aware of the responsibilities of his profession. He is also passionate about making good books popular, getting them read. This is why, for instance, he changed the names of Quimet (Joe) or la Colometa (Pidgey) in In Diamond Square. A translation has to feel familiar to the reader, not exotic because it’s foreign. And a certain sort of book helps:

"Like Rodoreda, Najat is bringing into Catalan literature more working-class situations and the relationships of these worlds to the other worlds writers write about. There is an elitism in Catalan literature, novels often avoid being critical with Catalan society, they play around with language and avoid scenes in lavatories in trains. But scenes in trains are what people live day-in, day-out."

Crime writing, I suggest, is critical of society and there’s a contemporary boom. "Yes, but there’s still a lot of contempt in the literary supplements for crime writing, ‘genre fiction’, as I’ve found when translating Teresa Solana, as if writing in a post-modernist style wasn’t another kind of genre fiction. There’s an aura about difficult prose, that it’s difficult and metaphysical so it must be good." 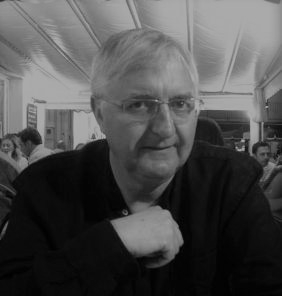