Visat núm. 8
(octubre 2009)
by Sameer Rawal
Even before seeing Kunwar Narain and listening to him reciting his poetry for the first time in my life a few years back I felt I knew his voice. I felt I knew his voice because I had read him earlier, and I imagined what he would sound like, what would be the register and the depth of his voice. His poetry is honest, he is what his poetry says, and leaving aside everything else this only makes him one of the finest poets in the Hindi speaking world, one of the rare species who reaches to the reader assimilating him/her in his work in such an astoundingly imperceptible manner that the divisory line vanishes, making the reader a poet himself/herself.

Everyone calls him Kunwar ji, 'ji' being the added as a grammatical symbol of respect, and to my mind, also as a symbol of a thankful and natural complicity with his work, as a result of experimenting intimacy with his words. Born in 1927, and apart from being known primarily as a poet Kunwar ji has an extensive body of work, and a myriad of experiences and influences which place him at par with the leading poets/thinkers of the world, and yet it is his politeness and earthy wisdom that wins hearts. He is concerned with his quest of the world as a poet or a sensitive being, rooted in language and/or thought, and the rest just follows its own course.

Kunwar ji has been translated nationally and internationally and has been honoured a number of times. Some of the important awards he has received include the Jnanpith award (the most prestigious Indian literary award), Sahitya Akademi award (the topmost award given by the Indian academy of letters), Kabir Samman, Shalaka Samman, Lohia Samman, Warsaw University's honorary medal and Italy's Premio Ferona which has been previously awarded to authors like Gunther Grass, J.M. Coetzee, Gao Xingjian, Ismail Kadaré, Roberto F. Retamar and many other distinguished international authors.

He published his first poetry collection in 1956, and his latest work, an epic poem named Vājashravā Ké Bahāné (On Vajashrava's pretext), appeared in 2008. This book length poem recalls the contextual memory of his another book length epic poem Atmajayi (The self-conqueror), published in 1965 on a character in Upanishad (Philosophical texts of Hindu religion, the oldest of these may have been composed around 5th century B.C.), Nachiketa. And during all these years he has published his many poetry collections, translations of Cavafy, Borges, Mallarmé, Derek Walcott etc., a short story collection, literary criticisms, essays, articles, writings in journals, anthologies and independent collections; and yet during the same time he has also edited a number of literary magazines and directed literary academies as well. And still he does not seem to be tired: one can still find him reciting poetry, giving lectures, participating in national or international conferences, seminars, in India and in far away lands. His experience and his words flow like a river, one just has to go to the river's bank to observe the mesmerising stream.

Kunwar ji has been associated with the Nayi Kavita (New Poetry) movement in Hindi literature, and has been one of the poets included in Teesra Saptak (The third heptad), one of the four influential poetry anthologies edited by eminent Hindi poet Agyeya which capture the modernist and experimentalist influences on Hindi literature. He is also described as a 'meditative' poet by some, a poet who 'dwells on the present through the prism of myth and history'. He does not adopt any fixed ideology and mind frameset, he is open to what he feels, receives and experiences. As he says in an interview on the subject of poetry, "Poetry is by nature a free art and does not welcome impediments and mandates. I have been writing poetry for nearly half a century now and have seen more than half a dozen literary movements come and go. What survived these is great poetry and not the hullabaloo surrounding them . . . When a movement preferred a certain kind of poetry, or a particular poet, as the model type, it encouraged imitation and thwarted originality."

Elsewhere on the function of a poet he has said, "In the huge carnival of life the poet is like a mimic who presents to people thousands of appearances. His every appearance is an experiential interpretation of life and behind them all is the mimic’s thoughtful and true personality which understands the fundamental play of all this diversity."

Another fleeting theme, as per some literary critics, in Kunwar ji's poetry is 'death'. His mother and sister dies of tuberculosis when he was eleven years of age. This tragedy marked his poetic life in a significant manner. He was born in the city of Faizabad, and spent his infancy there and in Ayodhya, again in the state of Uttar Pradesh. But after the grave incident he moved to Lucknow, the state's capital, where he ended up studying science and then a master's in English language. Perhaps due to formal educative exposure with science one can also faintly discern the science, rather the general logical methodology of pure sciences in his work too, may be as an element of modernism or experimentation. Kunwar ji has also said somewhere that in his formative years political leaders like Narendra Dev and Acharya Kriplani impacted his literary foundations. A visit, in 1955, to Europe, Russia and China and meetings with poets like Nazim Hikmet, Anton Slonimskie and Pablo Neruda also shaped his literary process.

Kunwar ji's work also shows his deep engagement with Indian literature, from its ancient Sanskrit manifestations till present. He seems to be well-versed, to say the least, with diverse aspects of Indian literature. This brings forth his qualities as a 'reader', which gets seamlessly reflected in his work as a 'writer'. And in other windows opening out of his creations we can also see a greater understanding of humanity, equality, metaphysical philosophy and a negotiation with reality-as-we-see-it, a negotiation which becalms us as a reader, leaves us without 'words'. And it is then, really, that we come to know Kunwar Narain. 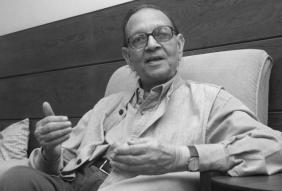