by Fina Llorca
This is a dense collection, with three differentiated sections. The image of the thaw, the recovery of water's fluidity, which is already in Marçal's previous books of poems the epitome of female representation, symbolizes a return to life and feeling. The thaw can occur once the death of the father, or rather, the death of he who brings the “Law of the Father,” the one responsible for this petrification, has been overcome.

The first section is dedicated to a poem by Sylvia Plath: “Daddy,” from Ariel (1961), was the title of the long poem that the American poet had dedicated to her father. She saw him as a fascist and herself as a Jew; the man was a “bag full of God,” a vampire at her heart. In the final stanzas, the daughter is able to drive a stake into the vampire and at last free her heart, and perhaps herself, from him.

The Marçalian “Daddy,” is, on the contrary, a reflection on the patriarchal system that the notion of the Father can encapsulate, but at the same time a lament for the death of her real father, Antoni, who had recently passed away and to whom she dedicated Llengua abolida . The poetic voice is situated from the daughter's perspective, not completely obedient to the Father and his Law, testifying to the patriarchal appropriation of the feminine voice, and answering it with word of what has been dispossessed. Marçal urges the father not to adopt roles of power and proposes the utopia of the “two twin stars” of night, when miracles and transformations are possible, two shining stars to overcome the symbolic dichotomy of the Sun and Moon. Marçal's “Daddy” ends with an emotional lullaby, in which roles are exchanged: the father can be the son and also the mother, and the daughter, mother. It is only thus that the father can be distinguished from the Father. Only this symbolic Father, portrayed by the petrifying image of the hawk, need be bitten by the difficult words of the daughter. The chess game of death, an image from the first poem, must allow this renewal, this beginning, as the thaw announces the spring.

Among the poems of “Daddy” there are two in which the poet shows for the first time a refiguring of the sacred word from the female perspective. To write the first of these poems, “Pare-esparver” (Father-Hawk), Marçal may have read Simone Weil's “Meditation on the Pater Noster,” some notes on the Lord's Prayer. However, hers is not, like Weil's, a prayer to God made man that ignores the existence of woman on earth. The Marçalian father-hawk is an affirmation of the feminine banishment regarding a religion that has never been incarnated in the body of a woman. It is a poetic affirmation made from the body, from the blood, as routine for women as the daily bread, blood that “s'escola enllà de tu en el dia d'avui” (flows beyond you this day), unnoticed day after day by the eyes of God. It is precisely the blood, language of the body, that is the only voice of the voiceless, wordless daughter, the voice of the silence that cries out in a world and before a God who has robbed her.

The second, “Pare per què no m'abandones” (Father why do you not forsake me), is a reformulation of the fourth statement of Jesus' agony on the cross. The complaining reproach of the Son made man in the Gospels becomes here the decided petition of the daughter who feels the absence of the father as an invasive and unlimited presence, which relegates her to an obsessive, sterile, and eternal search in her surroundings.

A third poem, “Tinc dins del meu cap un cap d'home” (I have in my head the head of a man), inspired by one of Frida Kahlo's portraits, is a reflection on female intellectual education in a patriarchal world: in the end, a dead-end alley. The man enclosed in the forehead of the poetic self, like the head of Diego Rivera in Frida's forehead, is here, as in Sylvia Plath, a bag full of God, or God himself, he of the clairvoyant eye that, as Marçal would explain in Raó del cos , is all-powerful but paradoxically blind.

The second section, “Ombra de presa” (Shadow of Prey), quite distinct, is in some ways the dark face of the book, which becomes luminous in the final section. Here, on the contrary, glides the presence of death, the eye of the hawk once again; ice, pain, war, and guilt. There is, at the same time, a declaration of confidence in the power of words: “Enmig de murs d'escòria, de ferralla” (Between walls of scrap-metal and dross) she again affirms, “No escanyis la petita que viu, rebel, en mi” (Don't strangle the little one who lives, a rebel, within me), from the third section. Yet another reflection on maternity with a poem of the same title also begins with a Sylvia Plath line, “till then your smiles are found money,” which Marçal contradicts as she has done with so many other poets' verses: “Des del principi no ha estat moneda fàcil / el teu riure” (From the start your smile has not been easy money).

The third section, “Contraban de llum” (Contraband of light), which contains the most poems, is an attempt to redefine love of amorous passion; but at the same time it is a pact, a primordial compromise, from the feminine perspective and the margins occupied by homosexual love in the dominant symbolism. The customs of love demand a high price for crossing borders, but this contraband baggage is no less than, and no more than, light itself. This book of poetry takes off from the penultimate poem of Marçal's previous book, Sal oberta , in which the poetic voice asked for other eyes, other words, new paths. It now claims “un altre nom per a l'amor” (another name for love). One could say that Desglaç is a composition used for finding, or rather, redefining the name of love. It is a demanding work in thought and expression, with unexpected and clarifying achievements, such as questioning the myth of complementarity between the sexes, seen now from the alterity of amorous femininity in “Si ens afegim tu i jo peça per peça” (If you and I were added together piece by piece).

The popular vein is an inspiration once more in “El meu amor sense casa” (My love without a house) where, through the structure of sentences that repeat and grow longer with some disquieting new images, the poetic voice seems to sing psalms of an exiled lament: love outside the norms has no place to live, no social space in which to be symbolized.

In Desglaç traditional poems are invoked and contradicted once more. The first poem is constructed in the style of Ausiàs March's cobles , but there is also an echo of the verses of Vinyoli, Dickinson, and the admired Renée Vivien, and resonances of Clarice Lispector.

With this collection Maria-Mercè, as she wrote in the prologue to Llengua abolida , considered a poetic cycle closed. To be sure, Marçal's work was now to enter into a period of reflection, in which the writer would contemplate her novel, La Passió segons Renée Vivien . This did not mean that she did not continue to write poems: in the posthumous collection Raó del cos we can read some of them, which recover the erased fingerprints of women in history, and also in sacred history. In a few poems, her own sickness and death can be read as transmuted into a feminine passion that had never been signified in the world. These are addressed to a divine Mother, banished and supplanted by the masculine God who, according to Marçal, never stops watching with his icy eye. The poet then dedicated herself to the works of Akhmatova and the tradition of women religious thinkers from the middle ages to Simone Weil, in harmony with the thought of the contemporary Luisa Muraro. 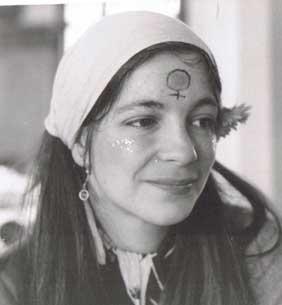