Visat núm. 5
(abril 2008)
by Jordi Malé
Born in 1893, Carles Riba was a writer of poetry, fiction, criticism, and translations, as well as a professor. His was shaped, like all of his generation, at the height of Noucentisme. If Noucentisme can be described it is, above all, due to his firm conviction in the meaning of this movement, under the guidance of Enric Prat de la Riba, Pompeu Fabra and Eugeni d'Ors, as a work of national construction and reform, to which he contributed as an intellectual and man of letters.

Ors' influence on the young Riba was revealed in his first articles of literary criticism Escolis i altres articles [Scholia and Other Articles], 1921, and in the beginning of Els marges [The Margins], 1927), in which Riba struggled to construct his own literary thought, deriving concepts and terms from different romantic and symbolist authors, but above all from Orsian ideology. His prose, in compensation, drew from the mannerisms and rhetorical emphasis of Xènius (Ors' pseudonym). This danger was partially avoided in his early incursions into the world of children's literature, such as Les aventures d'en Perot Marrasquí (The Adventures of Perot Marrasquí, 1924), where he achieved a more effective language that, although still literary, attained a quotidian and unaffected tone. This was not as much the case in the tales of L'ingenu amor (Ingenuous Love, 1924), stories not specifically for children about themes such as love, sacrifice, etc., in which the evident literary purpose again inclined towards the artificiality of Noucentisme. It was, in any case, in the translation of prose works finished in those first years (of Edgar Allen Poe and brothers Grimm stories, some of Plutarch's Parallel Lives and Xenophon's Anabasis [ Els deu mil ], Gogol's The Inspector-General , etc.) where hints of what Riba's prose would later become most suggest themselves (for example, in the stories of Sis Joans [Six Johns, 1928], and in his letters).

Riba's poetry in the 1910s, that of Primer llibre d'Estances (The First Book of Stanzas, 1919), could also be described as “noucentista” for its rigorous formal construction and for the constant presence of cultured sources (Homer, medieval Catalans and Italians, French symbolists, etc.). But these first poems, mostly amorous in theme, reveal an introspective intent, the self-analysis of states and experiences, which distinguished Riba in relation to the predominant realism of his contemporary Catalan poets (with the exception of J. M. López-Picó).

The transition between the first literary stage of Riba's life and the next are marked by 1922, year of crisis, and his stay in Germany. The discovery of Hölderlin (of whom he translated various texts) opened a new path in his poetry ( Estances. Llibre segon [Second Book of Stanzas], 1930), as did his rereading of Mallarmé and Baudelaire, and, later on, a certain influence of postsymbolist poets like Rilke (whom he also translated) and Valéry, although this last author influenced Riba's criticism ( Per comprendre [To Understand], 1937) more than his poetry. The slow rhythm of poetry composition in the twenties coincided with his almost full dedication to teaching and translating classic Greek, after his first and very celebrated verse translation of the Odyssey saw light in 1919. He contributed to the creation of the Bernat Metge Foundation, where he published Xenophon's Records de Sòcrates (Memoirs of Socrates, 1923) and Obres socràtiques menors (Minor Socratic Works, 1924), Plutarch's Vides paral.leles (Parallel Lives, 1926-1946) and Aeschylus' Tragèdies (1932-1934).

Dating from the 1930s, the sonnets of his following poetic work, Tres suites (Three Suites, 1937), show more of a postsymbolist influence, bringing them closer to a so-called “pure poetry,” although they are removed from it due to a subject matter based on life experience, more or less always present, in which some of the great future themes can already be glimpsed. Just before the Spanish Civil War broke out, Riba tried cultivating a short poetic form of Japanese origin, the tanka, with which he could express anything from impressions of landscape and feeling to the sensation of time's passage. He assembled two collections of them ( Tannkas de les quatre estacions [Tankas of the Four Seasons] and Tannkas del retorn [Tankas of Return], the latter written from exile), which, with another group of poems closer to ballads ( Per a una sola veu [For Just One Voice]), were published under the title Del joc i del foc (Of Games and Fire) in 1946.

Before the civil war, however, Riba made his commitment to the Republic clear with both articles and as participant, for example, in the creation of the Institute of Catalan Letters in 1937 and by attending the congress of the PEN Club in Paris. At the end of January 1939, just a few days before Barcelona fell to the franquist troops, he left with his family for exile in Spain. They first moved to Bierville (Boissy-la-Rivière), where he began to compose the most well known of his poetic works: Elegies de Bierville ([Bierville Elegies] written between 1939 and 1942, and published in a first edition in 1943 and in a second, complete, edition in 1949). These twelve poems, in classic elegy form, relate the metaphysical journey of a man's return to his soul “as to an old homeland.” The tragic theme of exile forms their background, and at the same time, in the poetic and personal experience they express, a religious dimension is introduced, one which would henceforward accompany Riba's work.

Upon returning to Catalonia in 1943, this last dimension persisted in the collection of sonnets, Salvatge cor (Wild Heart, 1952). It displays intense expressive concentration and, at the same time, a great density of profound experience, in which the religious sphere contrasts with and is complemented by the themes of love and man as a being with a soul but especially a body. In his last published poetic works, Esbós de tres oratoris (Sketch of Three Prayers, 1957), composed of long narrative poems, he recreates Biblical motifs (“Els tres reis d'Orient” [The Three Wise Men], “Llàtzer el ressuscitat” [Lazarus the Resurrected] and “El fill pròdig” [The Prodigal Son]) through which he poetically exposes a good part of his large themes. He left several uncollected poems in which those themes are taken up again, using forms of great simplicity. Riba's best translations also date from the post-war period: the second version of the Odyssey (1948), versions of all of Euripides' Tragedies (published posthumously), and all of Sophocles' Tragedies (one volume in verse in 1951, and two prose versions from 1951 and 1959, completed posthumously). Around 1957 he began his translations of Cavafy (also posthumous). The same year his last book of criticism, …Més els poemes (Besides Poems, 1957), with commemorative articles and prologues in which he once again confronted figures such as Maragall or Verdaguer. With his example of work and of rigor, and with his integrity as an intellectual and as a Catalan, Riba has become one of the figures who most represents the culture of the nation during the difficult nineteen-forties and fifties. 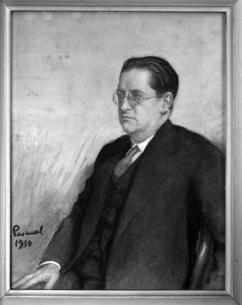