Visat núm. 12
(octubre 2011)
by Olívia Gassol
Conscientious of his surrounding reality, Salvador Espiriu’s literature (Santa Coloma de Farners, 1913- Barcelona 1985) knew just how to find new ways to express and reflect important Western events and the human condition. Bursting with originality, his work is complex right to the very extremes and uses a variety of registers too. Espriu’s works are some of the most important in twentieth century Catalan literature.

His literary trajectory began in 1929 with Israel —a group of poems written in Spanish and inspired by Gabriel Miró’s biblical imagery. In 1930 he published a prose type interior monologue El doctor Rip. Its main character was a doctor who self-diagnosed himself with terminal cancer. The following year his novel Laia put him in a position which allowed him to show the limits of the genre as set out by modernist models. His recognition by the critics, however, came along when he published Aspectes (1934), a collection of twelve tales written in very varied registers. In these poems Espriu delves into the satiric and demystifying trend of literature. He repeats this process with one of his richest, most innovative and unanimously celebrated works, Ariadna al laberint grotesc, published in 1935. It consists of thirty-three tales and in each of them Espriu managed to create an unusual set of prose. In this collection he experimented with techniques, models and different forms borrowed from recent literary tradition making satire or parody into deformed and grotesque prisms which allow us to observe the social, political and cultural reality of a country where people parade around as anti-psychologists and debtors. He used the style of Valle-Inclán and Pirandello. From the 1930s onward, Espriu rapidly developed his style until he reached a full- frontal refusal of natural expression. This was due to the fact that he did not understand literature as a natural art but rather as a derealisation which exposed everything considered to be artificial. He experimented to find new forms to describe the phenomenological reality- in other words- what lies on the margins of life or the dehumanised aspect morphed into a metaphor. Because of this, his characters soon begin to hang like flimsy puppets (Laia is nothing more than a shadow), and little by little the language used becomes experimental. His work becomes energetic and reaches a global audience. In other words, it becomes explicitly artistic because of his decision not to employ aesthetic resources (which favour fictional tricks) to allow the work to become a vehicle for human sensitivity (as had been done in Romanticism and with realism), but instead positions himself at the mercy of reflection and permanent commentary concerning tradition, art, history and the author himself.

Blossoming from the desire to find new registers and rhetoric nuances in his works 1936, he wrote Miratge a Citerea (1935) and Fedra (1937) based on a Llorenç Villalonga’s theatre work, which he had earlier adapted into Catalan. Leticia (1937) came from the same type of stimulus and contained a funeral scene inspired by a tale by Sir Edgar A. Poe which Espriu uses to satirize elements from the psychological novel which was very en-vogue at that time.

A young writer and outstanding student at the Autonomous University of Barcelona whose work was recognised by the literary critics of his country, he graduated in Law in 1935 and in History one year later. However, Espriu saw how the doors to his desired career as Egyptologue and writer were closing. The premature death of his father in 1940 pressed him to take care of notary affairs. This task angered him and is parodied in various stages of his work. The Spanish Civil War and subsequently the Second World War represented a turning point in his literary trajectory. Without abandoning his own fundamental ideals (especially the satiric genre) he went into refuge as he was too shaken up by the circumstances, by didactic tragic forms and lyrical solipsism. In 1939 he wrote Antígona (published in 1955), a tragedy about a classic myth transformed into an allegory of the Civil War via which Espriu manages to make his literature rub against human feelings and the historic compromise. This is a compromise using moral pity and reconciliation as the only form of salvation that can understand an absurd world, condemned to death and left to drift hopelessly and comfortlessly far from mercy the God. Such a tragic conception of the human condition, clearly inherited from the baroque tradition, gave form to his first poems: Dansa grotesca de la mort (1934), the representation human mortality, takes on a satirical character inspired by the popular iconographic medieval work El sotjador (1937), in which Espriu concentrates on the recurring image of a blind God lying in wait for his catastrophic creatures.

The fifties are marked by his search for a lyrical voice. In 1952 he published Mrs. Death and Les hores (extended in 1955), two years later El caminant i el mur and in 1955 Final del laberint. With Cementeri de Sinera these five collections of poetry form the so called lyrical or death cycle. A numerical structure decided on by the number of poems each one contained, confirmed that his poems should be read in a continuous and orderly fashion. Espiriu makes several personal discoveries from post-symbolist poetry which he in turn integrates into his personal literary universe. Just like the totalizing trends belonging to German idealism or Kant and Hegel’s philosophical systems, Espriu’s work (especially his writings from the fifties) follow a macro-structural approach in which its conforming elements are filled up like they were a single organic or dynamic body in constant growth. This unique structure allows him to apply a series of literary strategies making the reader perceive the work as if it were a single and complete unit with total coherence that was either already interconnected or capable of being interconnected as a whole. Some of these strategies affect the form, such as the numerical symmetry of the death themed poetic cycle in its definitive form —which follows a circular scheme of 30 poems like Cementiri de Sinera, 44 Les hores, 40 Mrs. Death, 44 El caminant i el mur, 30 Final del laberint — or like the cyclical revisions and corrections that have a tendency towards the linguistic unification of a global work. On the other hand, other elements affect the content, for example the repetition of certain characters in different books which Espriu uses to achieve a rich set of diverse perspectives; the extended signs and images that have different uses and meanings are taken up, left and then taken up again; recurring themes which become the literary drive (death, paradise lost, the human condition, the satire of traditional culture) in addition to the comments on the self and self-parodies which all create a permanent intertextuality. In fact, the overall structure functions as a contention point within the fundamental principle of dispersion which Espriu’s literature revolves around. It manifests itself in the cracks of consciousness permanently reappearing in a plethora of discordant voices and the fragmentation of a prismatic and constantly changing reality. Once the subject demerges form itself, from the Earth and God, a prismatic and constantly changing reality is no more conceivable.

In 1960 one of his most well-known poems La pell de brau [The Bull-Hide, English translation by Raffael Burton, 1977] was published. The myth of Sinera, and the small piece of land in addition to the lost world was then substituted for that of Sepharada —a term that Jews of the diaspora would call the Iberian Peninsula. The renewal of Iberian tradition, which Espriu ties directly to Maragall, allows him to combine lyrical reflection regarding death and the human condition with a powerful focus on the historical reality of Franco’s Spain harbouring behind itself a poetic metaphor that dissolves the state’s political limits. This allowed him to fearlessly denounce all the bases on which the Franco regime was founded (imperialism, the dictator’s warlordism, political repression or censorship); having to witness the daily hardships of the majority of Spanish society during the post-war period (hunger, poverty, lack of energy resources and begging) and the attacks against certain intellectual sectors of the country. Given that the narrative dating from before the war was different to elegiac poetry, many of the passages found in The Bull-Hide bring an endless amount of concrete and precise historic events of the immediate society out of the woodwork. The tone is new and the almost unique capacity to provoke the reader’s complicity, a complicity of a voice that often knows exactly how to lean toward a simplicity which favours peace, reconciliation and freedom.

The sixties were representative of Espriu’s popularity. An important role would be played by dramatists, singers, artists, editors, and of course, the press and the media. Espriu became the national poet and replaced Carles Riba in this role after his death in 1959. Perhaps it would be fitting to consider Ricard Salvat as one of the driving agents for the consolidation of this process. At the Escola d’Art Dramàtic Adrià Gual (EADAG) Espriu premiered versions of La pell de brau (1960 and 1963), Primera historia d’Esther (1962 and 1963), Antígona (1963), Gent de Sinera (1963) and in 1965 he revealed one of his most successful pieces of theatre called Ronda de mort a Sinera. It perhaps helped to contribute to the projection of Espriu’s public image. In 1963, Raimon even managed to put music to Cançons de la ronda del temps, El caminant i el mur; later on he would master music to go with the poem Inici de càntic en el temple (extracted from the same book), which soon after acquired connotations of political resistance. At its first recital in spring 1966 at the Olympia in Paris, Raimon himself dedicated this song to those locked up at La Caputxinada (Barcelona). Later on adaptations by Xavier Ribalta, Marina Rosell, Ovidi Montllor, Ramon Muntaner, Mercè Torrents and Manuel Valls Gorina came along. They set music to Primera història d’Esther, Antígona (Frederic Roda asked him to write a score for the debut in 1962) and to Cançons de la roda del temps and El caminant I el mur. In 1966, Valls himself asked Espriu for lyrics to his musical propositions called Les veus del carrer. These years were marked by a renewal of literary language. Their driving force came from collaborations with other artistic disciplines. The success and popularity of these collaborations translated into a completely new writing dynamic in which the majority of work was not born out of any independent creative impulse, but rather conditioned by an external factor. Espriu had to adapt his literary world to this new factor. However, to compensate for the consequences of the impact that La pell de brau had, in 1963 he wrote Llibre de Sinera signifying a return to the almost biblical myth. In 1967 he published a collection of haikus called Per al llibre de salms d’aquells vells cecs and followed it with Setmana Santa – a collection of two books of poems made from symbolic embedded tissue and centred on momentous and insightful speculation.

The literature produced in the seventies and the first half of the eighties suffers directly from the aforementioned change and is expressed through both the dispersion of his work and his failed projects like Les ombres, a collection of very bare narratives. In 1981, however, he published Les roques i el mar, el blau. It was a collection of narratives where Sinera’s grotesque world is infiltrated by classic myths. This is achieved through a permanent, satiric and innovative commentary on traditional culture. The rest of his books are based on circumstances: 1975 saw the publishing of a book of poems, Formes i paraules, inspired by the sculpture Apel·les Fenosa; in 1978 his play Una altra Fedra, si us plau was commissioned by Núria Espert, and in 1984 she directed the majority of his disperse poems. A few months before his death, Espriu motivated by the compulsion to unify style, language and the fictional universe, completed what was to be the final review of one of the works he had been writing throughout his whole literary career. 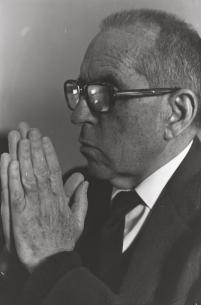