Visat núm. 2
(octubre 2006)
by Hans Ingo Radatz
The Valencian poet Vicent Andrés Estellés is a true classic of modern Catalan literature, one of those personalities who, in leaving us his legacy, has contributed so very much to Catalan culture. Estellés' poetic work is extensive: in 1990 the tenth, and at the moment last, volume of his complete works was published, although not even the majority of all that he has written is collected therein. One only needs to consider the large quantity of material, today still unpublished, that the author had stored in plastic bags in every nook of his home, as if hoping that readers and critics would be kept busy with his work for a long time, as if perhaps they still had not been able to grasp its significance completely. Like Fernando Pessoa before him, Estellés has produced the situation of a work that, having been gestating for a decade, was suddenly published out of the blue, and since that moment, bit by bit has been classified and granted the recognition it deserves.

Presented with the “Valencian writer,” the foreigner has a certain tendency to see Estellés as representative of a “regional literature.” In fact, however, the epithet “regional” to characterize Estellés work and his self-image is actually completely inappropriate. Like many great artists, it is quite certain that he found the great impulse for his artistic creations in a profound rootedness in the culture of his land. Yet, in a manner similar to Federico García Lorca, who precisely for this reason was known as “the universal Andalusian,” Estellés' ultimate objective is not local, but the necessary condition that makes universality possible. In this sense, we would be equally justified in calling Estellés “the universal Valencian”: everything that Granada meant for Lorca is what Burjassot, his hometown, means for Estellés.

In 1962, Joan Fuster, with his book Nosaltres els valencians (We the Valencians), established the bases of cultural and political Valencianism. This work, besides putting emphasis on Valencian particularities, proclaimed that the language, culture and history of Valencia formed, without doubt, part of a larger cultural frame: Catalan culture. What Joan Fuster did in the field of essay and history of civilization, Vicent Andrés Estellés brought to bear in the sphere of literature: rising above the provincialism that had reigned in Valencian culture for so much time, and offering a genuine Valencian contribution to worldwide literature.

The external circumstances of Vicent Andrés Estellés' life were not exactly spectacular, save some of the profound collective changes that took place during the course of his days. The years of the Franco regime were a traumatic experience for Valencian intellectuals, an experience that excepted no one and that kept them united. If we search for Vicent Andrés Estellés' biographical facts, from time to time in Valencia we are given the following response: in reality, he has no biography. It goes without saying that he has one, but in various aspects it is so typical and topical, like that of any Valencian writer of his generation, that it is difficult to consider it a biography. It could easily be seen as an optical illusion provoked by the enormous proximities and parallels of life.

As a typical twentieth-century artist, like Franz Kafka, Antonio Machado, Charles Ives and others, Estellés was forced to dedicate himself to the humble baker's trade for much of his life. Like the majority of representatives of Catalan culture in Valencia, Vicent Andrés Estellés came from a rural environment: he was born on December 4, 1924, in the town of Burjassot, close to Valencia, to the bosom of a family dedicated for generations to the bakers' profession. As a youth, Vicent worked for a long time as a baker, before taking up journalism. Later, with the title of his book El gran foc dels garbons (The Big Fire of Twigs), he would allude to the blaze of his father's oven, which would symbolize the passionate character of the townspeople captured in the book.

Estellés' origins, from a humble family, like “the books that do not occupy a distinguished bookshelf” (Fuster), marked his vision of the world and of art, and appear under various guises, now and again, throughout his work. He never considered himself a hermetic or academic poet, but always saw himself as “one among many,” as an author who, although he wrote unsentimentally “for the people,” did so above all from among the people.

Soon, even before the outbreak of the civil war, Estellés took his first steps as a writer, and at first he wrote plays in which his language was still stamped by dialect. His childhood and youth were marked by the experience of the civil war, and even more so, by the post-war years.

The academic aestheticism of the literary journal Garcilaso had a decisive influence in the Spanish poetry of those years. In the beginning, Estellés was also unable to free himself from this influence, and the style of the journal is evident in the first poems he published—especially in their language, since during that era he was still writing in Castilian. When he finished his studies, he was sent him to fulfill his military service in the Pyrenees mountains of Navarra: there he rediscovered Catalan because, as he put it, he felt very alone.

In 1948 he began to work as a reporter for the Las Provincias newspaper, where ten years later he would be named editor-in-chief. In 1955 he married Isabel; the marriage begun then would last until his death. His image as a responsible and attentive father of a family would perplex some of the readers of his love poems, which were quite liberal and sometimes even scandalously pornographic, when they would prefer to imagine the poet more like an unbridled and eroticized satyr. The unusual frankness with which he treated erotic themes, however, had nothing to do with the author's excessive libido. Valencian literature had traditionally treated sex more directly than in, for example, Barcelona. For many others, however, this facet of his work has very much to do with a poetic attempt to conceive of people's total sensory world, motive for refusing to leave out sexuality, one of its most important elements.

The tragic death of the couple's first daughter in 1956 must have been a hard blow, one from which Estellés took a long time to recover. Already during her infancy, he had had very direct contact with death due to the passing of several close relatives—an experience that made the theme of death one of the most common in his work.

Despite everything, Estellés did not take death as the point of departure for transcendental speculation, but rather presented it as a daily fact; the naturalness with which life and death coexist in Estellés works recalls, for its realistic treatment of earthly life, the medieval description of the dance of death. During these years Vicent Andrés Estellés began to increase his literary production, and he did so outside of official literary circles, purged by censorship, as the political situation permitted practically no publication. For many years he wrote with the disheartening perspective that his work would probably never reach a larger public than a small circle of poetry experts, and he filled folders and notebooks with poems, in the hope that better times would come. The language and the culture he felt belonged to him seemed condemned to death under the invasion of official Spanish culture, so Estellés found himself acting as chronicler and storing records, all in an obsessive attempt to retain the everyday details and daily words in danger of extinction.

Estellés' language, so full of force, was fuelled by the language of the classics, and was fed at the same time by a popular Valencian, with all of its vulgarisms and dialect. For Estellés, the judicial presence of colloquial elements counterbalances a purely poetic language. For this reason, in his poems he avoids falling into that escapist affectation that was propagated during the Franco regime as the prototype for all artists. Here is born the typically Estellésan balance between satire and realism that makes, once in while, a certain degree of emotion and sincerity possible, which could become tiresome if not for this light and ironic disruption. Rather, he always achieves charming effects and thus becomes comprehensible for the reader.

When the Spanish political situation was relaxed and contemporary Catalan literature could again be published, starting in 1971, the true “boom” of Estellés work began. In just a few years he had published a large portion of the work conceived during the course of the prior twenty years (in 1972 the first volume of his complete works was published). At the same time, his growing popularity as a writer in the Catalan language coincided with the radicalization of the right-wing nationalist sectors, which again gained power in Valencia. After the death of Franco, the objective of these groups, known as the “blavers,” was the fight against pan-Catalanism, and they did whatever they could to prevent the advance of democracy and decentralization. For them, the regrowth of a public cultural life in Valencia in the Catalan language especially galled them (and still does). As Estellés was a highly visible representative of this life, he was publicly besieged many times.

Yet, Estellés work survived safely and for a very long time avoided daily political conflicts, precisely because he had never wanted, despite his political commitment, to divulge his political ideology. He has received practically every Catalan literary prize of importance, and his status as one of the most distinguished contemporary poets in the Catalan language is universally recognized. After a long and difficult illness, Vicent Andrés Estellés died in Valencia on March 27, 1993. 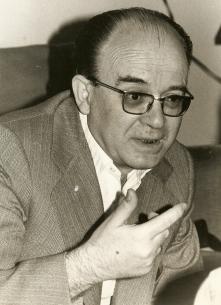