Visat núm. 14
(octubre 2012)
by Enric Gallén
Carlos Batlle (1963) unites in one the trinity of playwright, drama teacher and theatre theoretician. We speak of a complete man of the theatre who, with Adrià Gual (1891-1902): per un teatre simbolista (Adrià Gual (1891-1902): for a symbolist theatre) (2001), has already made a vital contribution as a documenter of one of the key characters and moments of Catalan theatre in the first third of the 20th century.

Gradually, and in parallel to the development of his work as a playwright, Batlle gave up the historical side of his work to dabble in literary criticism and theory, as confirmed by a series of articles on drama written by him. When trying to analyse Batlle’s body of work, one cannot ignore his reflections on contemporary drama, particularly Catalan contemporary drama, as they are absolutely necessary to understand the character, scope and evolution his dramatic production that has so far included: Sara i Eleonora (Sara and Eleonora) (1995), Combat (1995-1998), Les veus de Iambu (The Voices of Yambu) (1999), Miss Puta Espiritual (Miss Spiritual Whore) (1999), Suite (1999), Oasi (Oasis) (2001), Nits a Basora (Nights in Basra) (2003), Temptation (Temptació) (2004), Trànsits (Traffic) (2007), Oblidar a Barcelona (Forgetting Barcelona) (2008), two monologues – Bizerta 1939 (Bizerte 1939) (2001) and La pilota i la formiga (The Ball and the Ant) (2003) – and Zoom (2010).

As a whole, Batlle identifies his theatrical work with the "contemporary drama" model which emerged in the late eighties and early nineties, as a response to the fragmented and polyphonic drama, which questions the fable, plays with the juxtaposition of different subject matter and explores the extraction of information from and active participation of the audience. With this general definition of one particular dramatic model as our starting point, we will try to get closer to the theatrical career of Carlos Batlle in particular.

His first pieces – Sara i Eleonora, Combat and Les veus de Iambu in particular – conform perfectly to the criterion of the concept of "relative drama", which Batlle himself formulated in the article Un mar de dubtes (A sea of doubts), published in the programme for Zoom (Sala Beckett, Barcelona). It comprises "works that were 1) enigmatic; 2) texts that played with the mechanisms of ambiguity between reality and fiction; 3) that superimposed various dramatic spaces onto one stage; 4) which encouraged conflicting perspectives on the story; 5) that recreate – and thus put into perspective – the characters’ previous experience..." The characters in these pieces face some of the most personal, and crucial in the work of our author, conflicts: the confrontation of a variety of situations and realities (languages, ethnicities, religions, cultures and social problems). In the case of Combat we see them deal with this with ambivalent fear and being blinded by their differences in an ethnic war, or in Les veus de Iambu, we see the violence and incongruence that can arise from a chance meeting between a new-born baby and two foreigners climbing up a symbolic holy mountain.

In Suite we are faced with a strange story which takes place in two separate places, set in "any place in Europe in 1999". The author presents us with two couples – both very different as regards their way of life, behaviour, emotional awareness – and with a clear protagonist, Anna: a woman who lives her life consumed by the power of dreams and permanent adventure, a characteristic of the exotic novels which she devours and which, once read, return her to the unbearable mediocrity of life, which she constantly needs to reinvent. In short, Batlle invites the reader and audience of Suite to reflect on the effort required to live out one’s dreams, and the difficulties of this, as well as the possibility of immortalising them in literature.

His 21st century work, from Oasi to Zoom, represents a significant change in the dramatic trajectory he had previously developed, with the gradual appearance of a more defined and recognisable context, a more current thematic background and a more defined ideological position. In Oasi, set in "a valley, near the Pyrenees, 2001" around the two contrasting characters Xavier and Rashid, the author shows the role of the past, the legacy of our ancestors and the value objects can have in exposing the problem of identity, belonging and displacement. Focussing on two other pieces – Temptation and Trànsits – the first deals with the issue of North African immigration. Fully visible in Catalonia and dominated by fear and exploitation, Batlle moves between feelings of loyalty to one’s original identity and loss of its memory, and the attraction and fear of diversity and interracial relationships. The second, set in Europe in "the not too distant future" and "on a long train journey heading northward", shows the conflict of interests that arises between the old world, which inevitably collapses, and an emerging, younger society, which contaminates, transforms and throws the elder into violent turmoil.

In his last two pieces, Zoom and Oblidar Barcelona, the playwright knows how to make the most of using literary perspective, the role of the story and multifaceted lead roles to maximum effect – things which are more present than ever in Batlle’s productions of the first decade of the 21st century. Winner of the Premi Born prize for theatre, the author adopts in Oblidar Barcelona an unequivocally critical position on the subject of the new and current model of the city of Barcelona. He presents eight unhappy characters from different backgrounds all of whom are interrelated and who, from different viewpoints, all end up meeting in the same place. As Pere Riera commented: "They are beings who are existing in the coldest yet most electrifying dystopia. Maybe that's why they need to forget Barcelona and to break all ties with it in order to fix themselves. And to do so, the imprint that it has left on them, the traces of life that show when they are held up to the light, even – unfortunately – the path their life has taken until now, all have to be erased"(Oblidar Barcelona, 17) . Finally, in Zoom, Batlle proposes looking at a real historical event, present in our collective memory, from an entirely new theatrical perspective, removed from specific aesthetic ideals of the last century which only identified with the epic dramatic model. As he himself acknowledges, the five elements which made up the initial idea of "relative drama" in Zoom are still relevant now when talking about it: "In fact, all five points are related to this contemporary obsession with perspective. Or, to put it another way, with the construction and with the inner workings of drama from of a relative point of view. A point of view which is not only relative but multifaceted, has many voices and is almost always contradictory." 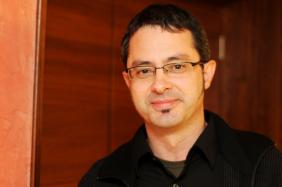