Visat núm. 16
(octubre 2013)
by Carles Camps
When we speak of a Catalan author, we often limit our perspective and analyse them within a local context, thus reducing their dimensions. We forget to situate them within a wider tradition, that of European literature. I hope to read the work of the poet Antoni Clapés (1948) from this perspective, one which is inclusive of him within a cultural community wider than his own. We will see the fundamental lyric voices in the modern tradition.

After the tears of the Romanticists, often in opposition to the Enlightenment, the poets who woke up to the cruelty of Capitalism —factories which destroyed the countryside, cities which suffocated rivers and valleys, a workforce abandoned to its fate— are primarily Baudelaire and Rimbaud. Baudelaire, with his classicism of the evil revealed by the destruction of what is human, abandoned definitively to the Gods; Rimbaud, with a descent to hell and the invention of psychic automatism in contrast to the order of power. From here there is a third position, Mallarmé: that of the research of language as a way to undermine the logic of moral discourse. Before, almost as a metaphor foreboding what was to be the break of modernity, the tragic experience of Hölderlin: Prometheus bound to insanity for wanting to take the fire from the word of the gods. It is not strange, therefore, that in Clapés’ 1992 - 1997 book Tagrera, in a long metapoem entitled ‘H. K., Saal 120’, he engages in a dialogue with the verses of The Archipelago. This dialogue is carried out by taking a transcript of the German, learning and understanding the poet’s preoccupations and whims in the light of an almost exhausted twentieth century, and making a correlation with Holderlin’s disappointment. The last four verses of ‘The Archipelago’, a geographical reality which is related to the fragmentation of modern discourse are reproduced below:

I recall it, it's my time, and these are my places. My memory.// I also recall the past: I say it to avert the evil omens that brotherly hatred must surely bring us. // I believe I have lived longer than the days I have been given to live.// I know that the (best) memories age with each passing moment. With every reminiscence some of them escape: they become ever more inapprehensible, like waves washing over the sand. // But I also know that I have nothing better to replace them. //For the moment. Being here. // And if time disturbs me/ the trial with too much energy, and poverty/ and the delirium of men shake my mortal life/ let me — in the depths of your strait— remember the silence." (Hamburg, October, 1990)

We will continue the list of the fundamental lyrics in the development of Clapés’ poetic voice. Alongside all the Avant-garde ‘-isms’ the main body of great modern poetry formed by Dickyson, Rilke, Valéry —Tel Quel—, Trakl, Juan Ramón Jiménez, Benn, Ungaretti, the aphoristic Char and Quasimodo: author of a concise poem in Italian, ‘Ed è subito sera’, fundamental in Clapés’ oeuvre: "Ognuno sta solo sul cuor della terra // trafitto da un raggio di sole: // ed è subito sera". This immense, brief poem contains everything that can happen in a person’s life, from the initial, luminous, explosion to the final implosion of our mortal shadow. Montale, Celan, Andrade, Valente… Authors, such as Cioran, Bataille, Michaux, Ponge, Jabès, who have been on the margins of the poetic genre are not to be forgotten, nor is the striking conceptual brevity of Brecht, the multifaceted writing of Pessoa, or the eastern contributions to modernism. Clapés has refrained from writing confessional poetry as if his subconscious looked for the force of the voice in the limits where life and voice are denied to us. The following beautiful and short poem from In nuce (1997-1999) talks of the limits of speech which, at times, oblige us to be quiet if we really wish to be productive because silence stimulates poetry: "this silence / which is not yet a word // this poem / which is not saying / this nothing". Another example is taken from Alta Provença (1998-2004): "Saying / annihilates /the poem. // Slow / wound / to the tongue".

Yes, as Wittgenstein argued, the limits that lead us if we are honest to remain silent. The Argentinian philosopher Nelly Schanith, when discussing the great theme of silence in Clapés’ poetry in a 2000 text entitled ‘La pàgina en blanc: variacions sobre el silenci’ (‘The Blank Page: Variations of Silence’) also stated the following: "The blank page is a desert, the image princeps which, I believe, is a metaphor for the tone of the original feeling which, as Hölderlin wanted, penetrates all of Antoni Clapes’ work. The desert has no centre and therefore is always at the centre. The centre moves with itself and gets lost with itself. Hence the blank page and the desert are complementary images of the labyrinth: ‘Without Daedalus, I become an errant traveller in search of the lost word. Of myself.’ A radical paradox brings the highest metaphysic to the poetry..: to convert solitude and silence into voice and communication."

It is therefore the poetry that I will refer to as modern prayer —restless modern prayer due to its loss of an interlocutor— which Clapés draws on to create his discourse. Prose poetry at the periphery of the previously cited El radical sentit illustrates this: from the description of an incredibly calm atmosphere the poet transports us to the doors of the impossibility of an agreement with nature: "Buzz of the bees amongst wisteria whilst I read Japanese poetry. A thin, mild air brings me the scent of spring, dressed in infinite colours. / I am wrapped in a great feeling of wellbeing, and I don’t know how to recognise myself there".

The refined lyrical outlook which Clapés lends our eyes often makes us rub them incredulously. However we look to convince ourselves of the goodness of his poetry as the essential view of this characteristic eye of Clapés’ most lyric work, an eye capable of opening up to us a sensible path in the vertical wall of knowledge. He offers us a striking image about time in the aforementioned Alta Provença: "The river travels slowly / through the fronds of poplars: / it pulls along a lime / as ancient as the river". Or the proverbial poem from Al marge (1989 – 1992) in which he imposes upon us the idea of the poem as a necessity and not merely fruit of speculative desire: "A thrush flies flush with the wall, almost brushing it: the fox’s pupils dilate. /The poem".

Having situated Clapés’ work within the European tradition, I wish to talk about the fundamental question in modern literature of the fragmentation of discourse, having recognised that there is no reference to the ultimate meaning to which we can refer and that organic language was nothing more than a fiction of power to maintain ideological control. Clapés’ work is a clear example of this. One can only speak of the ruin of everything. The poet, in Alta Provença, speaks of the truth without a home. An ethical declaration against ideological falsification. However, in order to talk about fragmentation, we must keep in mind the idea of ‘material’, hitherto inexistent, being considered a means of artistic, transcendent, indivisible function, and now transformed into a finality in front of a reality without finalism which also affects the identity of individuals and the self.

Lyric poetry was already one step further in the idea of discourse fragmentation. The lyrics, with its capacity for synthesis and concentration, from the outset gave us a lesson in alternative history and how impossible it is to capture the world in its entirety. Therefore it shut itself away in intimate discourse through which to offer us small, subjective, individual fragments therefore by no means totalising. In El radical sentit, the aforementioned book of aphorisms from 1985 to 1987, Clapés tells us "On the other hand, global types writing —which correspond to a Unitarian and Organicist vision of the world— have become entelechies, given that the discourse of modernity only just allows an unarticulated vision and therefore there are corresponding fragmentary practices." He continues, "Thus, the fragment will become a genre in its own right: not easily identifiable or definable but corresponding to the writings of modernity. A testimony to the inherent difficulty of saying".

In a reflective text about his own poetry, entitled Poesia i silenci (Poetry and Silence), Clapés defines the modern crisis of languages thus: "the irruption of silence as an element of theoretical reflection is itself in direct relation to the questioning of the same sense of language attributed to modernity. It is the crisis of a civilisation— the Western civilisation— that of the ‘death of God’ and the devaluing of morality which Nietzsche knew how to express with extreme clarity and radical pathos. All beliefs, all that we have held to be true, must be considered as false for there exists no true world. This situates the modern man purely in the domain of the uncertain, annihilating all shelter, even that of the word."

The aforementioned poem by Quasimodo would still be presented as a final fight against disintegration, of disaggregation, a small nuclear battle to contain man’s whole life in three verses: the Vitta d’un uomo as the other great of modern Italian lyric poetry, Giuseppe Ungaretti, named his oeuvre. Ungaretti — the Ungaretti of "I illuminate (myself) /with immensity" — who Clapés held in very high esteem, in an attempt to reconnect all of his work, always penetrated by the pain of loss: loss of origin; of his son; of the war. As if the modern adventure of thought told us that the only permanent thing was pain. Clapés’, with his temperate voice, tells us that suffering is always borne to us of loss and, hence, of the recuperation of memory, as if the memory were nothing but a bleeding wound in the skin of oblivion. "Before it dawns / light wails: someone / arrives / from oblivion" — verses from the book A frec (1992 – 1994).

All of Clapés’ work is borne of fragmentation: all of his discourse is the offspring of the modern impossibility of an ideological totality and, although it is possible to believe that adding together all of the pieces that the poet gives us the amphora would be whole once more, we realise that the pieces, although we match them up, belong to different amphorae and that the unity that has been lost.

The poet, like Tantalus, can never enjoy the gifts seemingly within reach of language and yearning. Everything is denied him through the absence of any gifts from the Gods. I will repeat my previous statement here: the great modern poet is Sisyphus. His effort will have no final reward but the effort in itself will have allowed him to live in the full clarity of limits and limitations. It will have allowed him to live in the fragmentary truths of Truth, of that which can never be reconstructed. However there are times in Clapés, especially in his last lyric piece— beginning with In nuce and ending with Arquitectura de la llum (Architecture of Light), passing through La llum i el no-res (The Light and Nothingness)— when he seems to manage to keep the stone of punishment balanced on top. An extract from In nuce almost make us believe so: "Undo the first light contours that are not words, still: murmur of sand, breath of doubts, moment seized. // You uselessly chase memories that flee: birds in the dark. Or a gesture. // The chimera of being. Stone. // This stone." 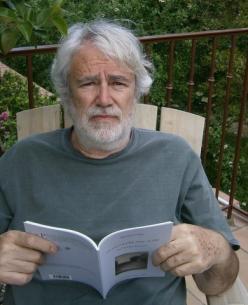