Visat núm. 18
(octubre 2014)
by Isabel Graña
Maria Aurèlia Capmany (1918-1991) was one of the most luminous and prominent intellectuals of 20th century Catalonia. Hailing from a Catalan-nationalist family of artisans she managed to become a writer, teacher, actress and theatrical director through hard work, passion and stubbornness.

Capmany belongs to the generation of writers educated in the liberal and progressive atmosphere of the Second Republic which, with the defeat of the Republicans, saw all its future prospects shattered after the Spanish Civil War. She graduated in Philosophy and, after attempting to pursue a career in academia, decided to work in secondary school teaching. Her initial challenge in the post-war world ―one which she didn’t recognise as her own and which she resolutely rejected ―was to reconstruct her own damaged identity as a consequence of the historical facts which had, until then, eclipsed her. Writing was the medium she found through which to try and understand reality. As Niní, the protagonist of Betúlia, says, "I write this, or anything else, to become aware of and to grasp this reality that I’m running from and it only seems truly real if I my jumbled handwriting stamps it onto a piece of paper."

Capmany considered herself a writer above all else and, more specifically, a narrator. She began her literary career at a time when the prohibitions of the Francoist regime made any sort of future for writers or the publication of their work impossible but her will was resounding: as she said to Salvador Espriu the day they met, "I will write even if the world ends". In 1947 she was a finalist for the Joanot Martorell prize and in 1948 was awarded it for the novel El cel no és transparent (The Sky Is Not Clear), originally banned by Franco’s censors. It was revised and eventually published in 1963 with the title La pluja als vidres (Rain On The Windows). She finally managed to publish her first novel Necessitem morir (We Need to Die) in 1952. Thus was born a writer who would change the role of women in literature for her contemporaries and who, years later, would hand the baton to a new generation of 1970’s female writers, for whom she would become an indisputable point of reference.

Until 1965 Capmany combined dedication to a career in secondary school teaching with writing. Ara (Now), Tana o la felicitat (Tana or Happiness) and L’altra ciutat (The Other City) are some of her early novels: tentative attempts at finding her own narrative voice in which she doesn’t hesitate in deviating from the few existing models, be it in topic or by superimposing or combining literary subgenres. Her most mature works were published at the end of the 1960’s and in the following decades, such as Un lloc entre els morts (A Place Amongst the Dead), Vitrines d’Amsterdam (Showcases of Amsterdam i Lo color més blau (The Bluest Colour). This transgression in genre is also key in the mixture of elements of fiction and memoir, as seen in the early short story D’Arenys a Sinera (From Arenys to Sinera) which, to a certain extent, anticipated Capmany’s memoir pieces with suggestive and evocative titles such as Mala memòria (Bad Memory) and Això era i no era (That Was and Was Not).

Her other great passion was the theatre. In all senses of the phrase, Capmany was a ‘woman of the theatre’. Her first play, Tu i l’hipòcrita (You and the Hypocrite), was put on by the Agrupació Dramàtica de Barcelona in 1957. However, as a dramatist she produced her most successful work from the end of the 1960’s with Vent de garbí i una mica de por (South-westerly Wind and a Little Bit of Fear) and Ca, barret! o varietats de varietats i tot és varietat (Varieties Of Variety And Everything’s Variety) the cabaret show which she co-wrote with her partner, Jaume Vidal Alcover, to be performed in La Cova del Drac. She was also an actress, set designer and director, translated theatre and, along with Ricard Salvat, founded Escola d’Art Dramàtic Adrià Gual (Adrià Gual School of Dramatic Art), a clear replica of the regime’s theatre studies programme, through which they achieved a widespread promotion of Salvador Espriu’s work, staging La gent de Sinera (1963) (The People of Sinera) and Ronda de mort a Sinera (1965) (Dance of Death of Sinera).

Despite her frenetic activity, Capmany continued to write until a few days before her death. As well as a brief foray into the world of children’s and young adult literature, she wrote more than 25 narrative titles, some 15 theatre pieces and more than 20 essays on a variety of topics: feminism; history; literary criticism; politics; popular culture; and sociology, all whilst maintaining an intense career as a translator. The result was an extremely personal oeuvre of great depth and breadth which reflects both her versatility and the influence of the topics which occupied her literary, cultural and political activity. Furthermore, Capmany occupies a unique place amongst the, mostly male, generation of post-war writers — those in interior exile — amongst whom she moved with great ease and naturalness. As Perucho would say years later, "she was a very resolute young woman. She seemed to me to be the most determined woman that I had ever met, with her own convictions and ideas, which I personally found to be farfetched."

Capmany knew how to gain intellectual authority in a society which had recoiled considerably and in which the prevailing National Catholicism of Franco’s regime had once again relegated women to within the home and family circles. In her own way she managed to defy the dominating male models of the time, recommending to her students that "it’s much better to know French, English or Russian [than sewing], because if your belt ever breaks, you can always tie a knot in it". As an author (Feliçment jo sóc una dona (Fortunately I Am A Woman), Cartes impertinents (Open Letters)), or as a playwright (Dones, flors i pitança i altres peces curtes (Women, Flowers and Charity; Other Short Works)) Capmany always acted as an activist in defence of women’s rights: travelling the country to speak at conferences and writing articles in the press. She wrote the first essays in Catalonia to be published on the subject: La dona a Catalunya (Woman in Catalonia); El feminisme a Catalunya (Feminism in Catalonia); La Dona: dona, doneta, donota (Woman, Little Woman, Whore) are amongst the most celebrated. Consequentially, when censorship permitted the publication of the translation of Simone de Beauvoir’s ‘The Second Sex’, Josep Maria Castellet gave her the task of writing the prologue for Edicions 62’s edition, forever linking her name to Catalan feminism.

Maria Aurèlia Capmany was a progressive woman: a cultural activist compromised by the time in which she lived. She worked with an array of cultural organisations (Òmnium Cultural, Obra Cultural Balear and the Associació d’escriptors en Llengua Catalana (Association of Writers in the Catalan Language)) and was president of PEN Català from 1979 to 1982. A tenacious opponent to the Francoist dictatorship, she also participated in clandestine cultural activities during the 1940’s and had a notable public position during the transition to democracy. It is therefore not surprising that these endeavours culminated in her commitment to a political career with the Catalan Socialist Party, PSC, by accepting the position of Culture Councillor for the local Barcelona City Council. Through this she ran projects as important as the Mercat de les Flors city theatre and directed the council’s publications during Pasqual Maragall’s mayoral term. 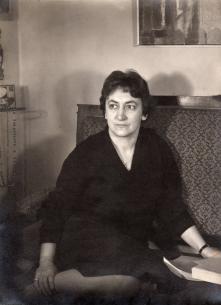