Visat núm. 8
(octubre 2009)
by Josep Ballester
Joan Fuster is the most important essayist of twentieth-century Catalan literature. Born in Sueca, La Ribera del Xúquer, in 1922, he was a poet, writer of articles, professor and translator, with a wide-ranging and thematically diverse body of writing. He centered his attention around a vast thematic edifice: the human being. His work is presented as a universalist vision that considers, and makes us consider, the problems of modern man, from their most basic, mundane forms to the crises and general inquietudes that define our epoch.

Fuster began law studies at the University of Valencia, where he received his degree in 1947 and his doctorate in Catalan literature in 1985. From 1983 to his passing in 1992, he was a professor at this university, first as adjunct, then as full professor, and upon retiring, professor emeritus. In 1944 he published his first article in Catalan, "Twenty-five Years of Valencian Poetry," and collaborated on the provincial almanac. From 1946 to 1956 he co-directed, with Josep Albi, the journal Verbo , where his first serious literary articles were published. His first books, however, were poetry: Sobre Narcís (About Narcissus, 1948), Ales o mans (Wings or Hands, 1949), Terra en la boca (Earth in My Mouth, 1953), and Escrit per al silenci (Written for Silence, 1954), among others, all collected in Set llibres de versos (Seven Books of Verse, 1987). His poetry is not an appendix to his essays; it is a fundamental element in the evolution of his literary labors. In it we find two differentiated viewpoints, that of an exquisite poet, dazzled by pure poetry and symbolism, and that of a bitter and ironic poet, with a markedly antilyric tone.

In the late forties in Levante, Valencia, he began his involvement with the press, one of the most pronounced and continual facets of his output, which he continued until a very advanced age. He published in the newspapers and magazines of Valencia, Barcelona, and Madrid, and in many other periodicals, among them some published from exile ( La Vanguardia , Destino , La Nostra Revista , Serra d'Or , Pont Blau , Tele/Exprés , El Temps , and ABC ). In the newspaper article Fuster found the kernel of the essay, its incipient state.

In 1955 he began, with El descrèdit de la realitat (The Discredit of Reality), a brilliant career as an essayist of vast thematic breadth, served by an incisive style and a skilful and precise use of adjectives. Another aspect of his work, also commencing in this period, was that of an erudite literary history and criticism, which alternated with collections such as Antología del surrealismo español (Anthology of Spanish Surrealism, 1952), co-produced with Albi; Pàgines escollides de sant Vicent Ferrer (Selected Pages of Saint Vicent Ferrer, 1955); Antologia de la poesia valenciana (Anthology of Valencian Poetry, 1956); Recull de contes valencians (Selection of Valencian Stories, 1958); and Ausias March: Antologia poètica (Ausias March: Poetic Anthology, 1959). His dedication to Valencian themes culminated in 1962 with the publication of Nosaltres els valencians (We the Valencians), Qüestió de noms (A Question of Names), and El País Valenciana (The Valencian Country), indispensable books for learning about Valencia's history, culture, and problems of national identity. The publication of these books, especially the tourist guide El País Valenciano , was considered an outrage to the most sacred Valencian values: from gastronomy to indigenous folklore. The more reactionary sectors of society used the occasion to present him as an enemy of the nation. In this way began a campaign against Fuster and everything that his work and intellectual trajectory stood for. Out of this personal dynamic he published Raimon (1964), Combustible per a falles (Fuel for Bonfires, 1967), L'albufera de València (The Tidepool of Valencia, 1970), Un país sense política (A Country without Politics, 1976), Destinat sobretot a valencians (Destined, Above All, for Valencians, 1979), and Ara o mai (Now or Never, 1981), as well as numerous erudite historical, biographical, and travel articles and studies.

In the field of essay, he published Les originalitats (Originalities, 1956); Figures de temps , which won the Yxart prize (Figures of Time, 1957); Indagacions possibles (Possible Inquiries, 1958); Judicis finals (Final Judgment, 1960); Diccionari per a ociosos (Dictionary for the Idle, 1964); Causar­se d'esperar (Making Yourself Wait, 1965); L'home, mesura de totes les coses (Man, Measure of All Things, 1967); Consells, proverbis i insolències (Advice, Proverbs and Insolence, 1968); Examen de consciència (Examining the Conscience, 1968); the suggestive Diari 1952-1960 (Diaries, 1969); Babels i babilònies (Babels and Babylons, 1972); and Sagitari (Sagittarius, 1985). In these works Fuster pays tribute to the tradition of classic humanism with moral roots, while treating themes from history to politics, passing through the most diverse aspects of cultural and daily life. One may find, as well, the inspiration of French moralists and rationalists, from Montaigne to the encyclopedists. Writings in history, criticism and literary divulgations include La poesia catalana (Catalan Poetry, 1956); Joan Serrallonga (1961), in collaboration with Joan Reglà; Poetes, moriscos i capellans (Poets, Moors and Priests, 1962); El bandolerisme català: la llegenda (Catalan Bandits: The Legend, 1963); Heretgies, revoltes i sermons (Heresies, Revolts and Sermons, 1968); Literatura catalana contemporània (Contemporary Catalan Literature, 1972); the collection of studies Llibres i problemes del Renaixement (Books and the Problems of the Renaissance, 1989) and Les Constitucions del convent de Sant Josep de València (The Constitutions of the Convent of Saint Josep of Valencia, 2002); as well as three extensive introductions to the respective work of Joan Salvat-Papasseit (1962), Salvador Espriu (1963) and J osep Pla (1966), of a great analytical penetration and capacity for synthesis; ending with Contra el noucentisme (Against Noucentisme, 1978).

Joan Fuster was, without doubt, the most formidable Catalan essayist of the emerging generations after the civil war. The force of his intellectual personality and the breadth of his work––which manifested as much a profound humanist vision and an undeniable political volunteerism as a skeptical criticism and corrosive humor––have gone beyond the literary world and have reached the cultural and civic life of the Catalan regions, the united consciousness of which he largely helped to create. The irreducible incisiveness and critical point of view of his work were the object of some attacks. He was member of the Institut d'Estudis Catalans (Institute of Catalan Studies, 1978) and promoter and president of Acció Cultural del País Valencià (Cultural Action of Valencia, 1978), and was awarded with the Premi d'Honor de les Lletres Catalanes (Prize of Honor of Catalan Letters, 1975), Premi de les Lletres del País Valencià (Prize of Valencian Letters, 1981), and in 1983 received the Gold Metal from the Generalitat of Catalonia. In 1984 he was given a doctorate, honoris causa , by the University of Barcelona and the Autonomous University of Barcelona. He was president of the Association of Writers in the Catalan Language (1987–1991), and as a posthumous title, in 1992, was given High Distinction by the Valencian Generalitat. Fuster has come to be, from the sixties up to his death, one of the most representative and influential figures of Catalan culture. 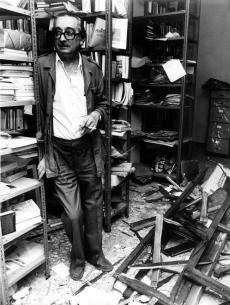