These traces of the dark energy of the universe. This dense fog over the pine woods. This storm hank. These ashes of nickel and cobalt. This sail of light in the shores of the day.

Blazing times in this slashing and burning field, the mineral furrow of the birds, the boat of the sun that abandons itself in the brushwood. You get closer to the eye of the infinite and gaze the shining of the rubies, the lost berries, Orpheus look: The ice wave of a big wound.

The last look over the world: The celestial cornfield and the golden arch in the wooded valley. The oil of the pantries: The echo of familial voices: Moans of the waterwheel: Filled buckets of water and sand. A blackbird hides in the ferns of the garden: The body of the space: The volume of breath: The clay. The denudation of the fleshy fruits of winter: Littoral of the vast brightness.

: From this dune emerges the orchid that summons an insect to fertilize it and unfurls the luminous flag of desire: Bog memories: Fertile beads: Vegetable psalter: Dream of ancient seeds in the night of the earth.

Return to the body of the bodies, to the solar liquids, to the abode of the material: Refuge of the voice: Caterpillar of thougth. Return content to the hollow silence of the almond after making a long journey.

It´s the light which falls, liquifies and vanish off: The lath house of dawn: Calligraphies in peat under green fields of the water: The fishbone of the miracle. It is the planet which finds once more the trail of its orbit, the secret of numbers, the cold sap that feeds it. The unfathomable silence before the great hailstorm.

Retrace the path that leads to the waves of the jellyfish, to the forest that breaks out in flames, to the garden where the seed of the west wind dwells. Striping the bark of the amnion from the words, the lava, the canticle of the ghost that inhabits the machine.

This quietude after the gale. The chalice and the thorns. This still clarity of waters: The prayer wheel of the word: The rotation of the star which becomes inflamed: The pearl of the lotus: This silence of February when the bird comes back to the burrow of the sleeping seed: The ash of numbers: The transit to the serene plenitude.

In the beginning it was the solar orchard: The snowy marrow of the volatile islands: The purple hair of restless hay fields: The chrysalis of the comet: The moan of the blazing caravans which skirt the ochre immensity: The prayer of the scree which reels the material and the rust of the tear: The gesture of the memory when you say alphabet, western sea, constellation, atlas. 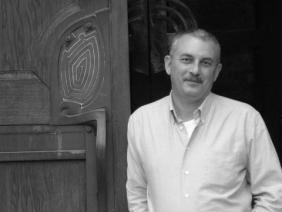