Visat núm. 6
(octubre 2008)
por Xavier Bonillo Hoyos
Ramon Muntaner was born in the village of Peralada in 1265, in the last years of the reign of James I the Conqueror (1213-1276). When just ten years old, in 1275, he formed part of the retinue of the infante Peter, the future Peter II the Great (1276-1285), who was interviewed in Paris by the king of France, Philip III the Bold (1245-1285). After the death of James I the Conqueror (1276), his sons were distributed over the territories of the crown: Peter the Great reigned in Aragon, Catalonia and Valencia, James II of Majorca (1276-1311) in Majorca, the Roussillon and Montpelier.

The relationship between the two brothers deteriorated due to the conflict provoked by the rebellion of the Sicilians, known by the name of the Sicilian Vespers (1282), against the occupation of Charles of Anjou (who had been proclaimed king of Sicily and Naples in 1268 with the approval of the Pope). King Peter the Great became involved due to the hereditary rights that he flaunted over the island of his wife Constança, granddaughter of the emperor Frederick II of Hohenstaufen (1220-1250), whom he had married in 1262. Peter headed his fleet towards Sicily, where he was proclaimed king and succeeded in expelling the Angevines from the island, with the help of the nobles and the Sicilian people. These events provoked a reaction from Pope Martin IV, who ex-communicated the Catalan king and forbade the kingdom of Sicily. However, as these measures did not change the situation, the Pope continued pressuring them and forbade the kingdoms of Aragon, Catalonia and Valencia, and offered them to Charles, son of the King of France, Philip III the Bold. The conflict moved definitively to the continent, where the Pope and the king of France organized a large army of Crusaders to conquer the territories of Peter the Great, which began to march at the beginning of 1284. James II of Majorca, who had been asked to help by his brother, allied with Philip II and conceded right of passage through his territories to the great quantity of French forces. During the incursion of the Crusaders, the village of Peralada, where Muntaner still resided, was totally destroyed by the troops of Philip III the Bold in 1285. Later, Philip III took Girona, but the undoing of the French fleet at the hands of the admiral of the Aragonese fleet Roger de Lluria (September 1285), epidemics, a lack of food, and the king's sickness obliged the French to retire. Upon arriving in Perpinyà King Philip died (October 1285). Once the French were expelled, Peter snatched Majorca from his brother. In all, Alfonso II the Frank (1285-1291) had to finish the mission, since King Peter became sick, and, like his French rival, died shortly after the end of the war (November 1285). His son, Alfonso II, finished it by taking Majorca, Ibiza and Minorca (1287), in the conquest of which Ramon Muntaner participated, and ceded the control of Sicily to his brother James, who at the death of Alfonso became James II of Aragon (1291-1327). James II returned the kingdom of Majorca to his uncle, James II of Majorca, in exchange for which he solemnly declared himself vassal of the king of Aragon.

Once the campaign of reconquest was finished, Muntaner established his residence in Majorca. In 1301 he left for Messina, the capital of the kingdom of Sicily, then under Aragonese administration. After a momentary stabilization of the island with the peace of Caltabellota (1302) between Catalonia and Anjou, with the possibility of supporting the troops of the Byzantine Emperor against the Turks, in the middle of 1302 the company of Almogavars commanded by Roger de Flor, younger son of the falconer of Frederic II of Hohenstaufen, Richard de Flor, left for the East. Muntaner's function in the company, in theory, was master rationer (basically he was in charge of tasks of administration and accounting), although given the circumstances he had to participate in some battles. In this sense, the defense of the city of Gallipoli especially stood out, where he remained as Captain. Muntaner participated in the expedition until shortly after the traitorous assassination of the grand commander of Roger de Flor's company. In fact, Muntaner left Negroponte during the summer of 1307.

In 1309 he finally arrived in Sicily, where he was named governor of Gerba, a small island close to Tunis of relative importance for the commerce of the crown of Aragon, with the mission of pacifying it. Two years later he left Gerba and headed for Valencia. In the capital of Turia he married Valençona in 1311. But three weeks later he had to return to Gerba, where he remained until 1314 with his family. In 1315 he received the important responsibility of accompanying the heir to the kingdom of Majorca, infante James and the future James III of Majorca, who had been born only a few months earlier, from Sicily to Perpinyà. In 1325 he settled in the estate of Xilvella (today known by the name Xirivella), near the village of Mislata in the Valencian countryside. Later he served as a judge in Valencia, a position for which he was chosen both in 1328 and in 1331. In 1332 he was proclaimed knight by James III of Majorca and was named mayor of Ibiza, where he died in 1336. His remains were moved to Valencia. 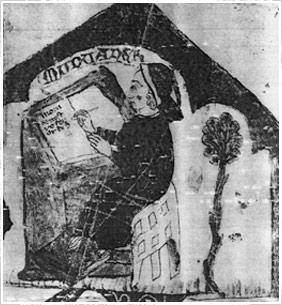