Francesc Parcerisas
Writer’s Album
His hands, perhaps tired of existence,
disturb your memory and feelings:
simply writing near the wood in the twilight
and listening to a wind, flush with the paper,
which recalls the submerged beach of childhood.
Even precise words get lost and vanish from view
like the remains at the bottom of a cup of coffee;
and fragments of tobacco fall on the breast
while the cigarette is being consumed at the lips.
Is that what he wanted? It doesn’t stop him from
thinking it could have been otherwise.
He is only intrigued by the errors that bring us
as far as this blind alley, with no way out of the labyrinth,
and that make stone be stone, but red
be ruby, whether it be dream or crime.
Words have blurred the edges between illusion and lies,
perhaps even to the point of his wishing to believe
that there really could be young gods and eternal love.
He has grown old without trouble, stretched out like a dog
among his books and the things he sets value by
and he has no fear of dying from cold. Adjust the shutters and smile.
No need for replies. You and I can leave
the tendrils that make the hedge impenetrable;
this evening already has unravelled all the thread.
Translated by Claire Tylee
Francesc Parcerisas, Writer’s Album. PARCERISAS, F. Focs d’octubre. Barcelona: Quaderns Crema, 1992. 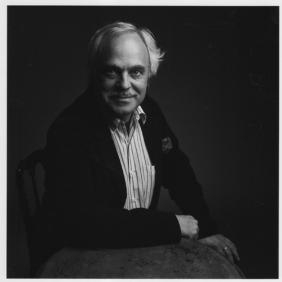